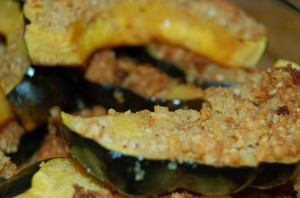 When I was in college I lived in a 75 year old poorly built house with only a wood stove for heat. In Oregon that would be bad enough but I was in Western Massachusetts. Somehow it became my job to get the stove going in the morning to get the house warmed up. I’d set my alarm for 6am so I could get the fire started and hop in the shower (thank goodness we did have a water heater.) After my shower the temp in the living room would be up to about 45 degrees on a good day. I would sit in front of the stove to dry my waist length hair while the house warmed up.  My 3 roommates would one by one emerge from their rooms with countless layers and most often wrapped in blankets or down sleeping bags. Our 4th “housemate” lived in an actual cabin another 20 yards into the woods. He had no bathroom or kitchen at all. He also had no job so he would typically wait until after we’d all left to shower and make breakfast.

But this story isn’t about the cold, it’s about squash.

That year we would each pitch in $25 a week and one of us would go to Bread and Circus (the big health food store a few towns over) and do the household shopping. We would take turns cooking. All vegan, all whole foods, and usually delicious.

One day our most eccentric housemate left as usual to do the shopping. He came home and a few hours later called an emergency house meeting. We sat in the living room and watched him pace around a bit. He was agitated, and excited. Once he had his audience he announced his big news. On his way to town to buy the groceries he passed a farmer selling butternut squash out of the back of his pickup. He pulled over and was somehow talked into buying a bushel of butternut squash.  There was even enough money left over, he beamed, to buy soy milk and oatmeal too! As we wondered exactly how many squashes comprised a bushel, and how many different ways we would have to eat it before we could go shopping again, the roommate opened our pantry to reveal that he had physically removed the bottom 5 shelves to make room for a 4 foot high stack of squash. First question answered.

Needless to say that was a long, long week. And we ate off of that bushel of squash for almost a year.

It was a solid decade before I could enjoy squash again.

Which leads me to today’s recipe: Hazelnut and Honey-Roasted Acorn Squash adapted from the same cookbook I used for my last post the Mitsitam Cafe Cookbook.

This can be served hot or reheated later. My four year old and I each took it for lunch a few days later and although the texture changed slightly, warming it up in the microwave worked just fine.