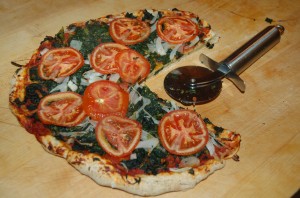 This gluten free bread mix was recommended to me a few years ago. It turns out that this mix is based on a traditional Brazilian cheese bread called Pão de queijo. Similar breads are also found in Bolivia, Paragua, Argentina and Colombia. They can be made from scratch or more commonly from a mix. The main ingredient is usually Cassava or Tapioca flour, and in Colombia is also typically made with corn meal. The traditional recipe includes cheese but with Chebe mix the cheese is optional.  It also calls for adding eggs, milk, and oil. We use almond milk in place of the cow milk and it works just fine (I think you could use any milk substitute for that matter.) There are several different Chebe mixes available: pizza crust, rolls, sandwich buns, bread sticks, and cinnamon rolls. I’ve seen them in PDX at New Seasons and at Fred Meyers.

We tried the pizza crust this week and it was great. The cool thing about this product is that it has that chewiness of pizza crust that typically gluten free crust just doesn’t have. My 4 year old doesn’t eat wheat but he does eat gluten so we used to get Graindance spelt pizza crust before our local health food store stopped carrying them. The problem is that now he doesn’t know that pizza should be chewy so sadly, he didn’t like the Chebe. Bummer for him but great for the grownups, we got to eat it all and enjoyed every bite.

As for toppings, you could use anything you’d want to put on pizza.We’re dairy-free at our house so we made the pizza without cheese then sprinkled Daiya shreds on top. That review will be next week.