I’ll admit to using an actual antiperspirant, rather than just a deodorant (which takes care of odor but doesn’t stop you from sweating) when I’m wearing a fancy dress or giving a talk to a large group. But truthfully I’d really rather not. Although we don’t have any decent long term studies that show that using antiperspirant is harmful, it just makes sense that it’s not a good idea to stop yourself from sweating. Sweating, after all, is a normal detoxification process that your body undergoes. I’m not as worried about it as many of my colleagues but I figure better safe than sorry.

So…I’ve been on the hunt for one that is strong but not chemical laden. I tried the primal pit paste and wasn’t a big fan (though others, like Food Babe, love the stuff) as well as Lavanila, and countless health food store brands that left something to be desired to say the least. The one exception is the Jason tea tree stick deodorant but I don’t love the smell…and on a really hot day it doesn’t hold up beyond a few hours.

I’ve tried to make deodorant a number of times. I’ve found that most of them work fine. BUT I don’t like applying it with my fingers. Not that I have a problem sticking my fingers in my armpits, but the cream is often hard to get off of my hands, even with soap.

One of my patients though swears by this recipe that she slightly adapted from the link below.
I’m going to try it and report back. How about you do the same? 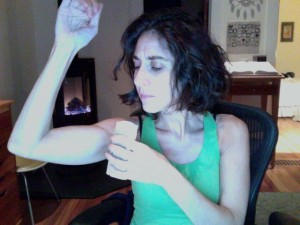 Mix everything up in a bowl until it forms a thick paste. Transfer to your storage container and then allow 24 hours to ‘set up’. Apply a small amount with your fingertips. Let me know if you do this, how it goes!