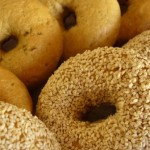 I grew up in Connecticut with parents who migrated there from Brooklyn and Queens because, well, that’s what most of their peers aspired to. As was the tradition in his family, my father and I went to the deli every Sunday morning and picked out a dozen slightly overdone bagels. Salt or plain. Thin sliced Nova Lox. Whipped cream cheese. And Kenny, behind the counter at Gold’s, would always give me a big fat salted pretzel. On a good day (if the Giants were playing and might actually stand a chance) I could also talk my dad into getting me a few of those little mini salamis that would hang off of the back wall like crepe paper streamers at a birthday party.

You can imagine my horror when I moved to Portland and found that the bagels here are, well, not bagels. Almost 20 years after my arrival we did get one place in town that had almost an East coast bagel, but alas they just got bought out by some big chain who, of course, just ate them up and didn’t bother to keep the recipe.

Truthfully, after the initial shock I didn’t really care. I’ve been off of wheat for years and I’m not really a carb cravin’ kind of girl. But funny enough, now that I’m gluten-free as well (feeling so much better by the way, but that’s another post altogether) I’m a bit more focused on the specialty items in the store. Today at the co-op I saw a gluten-free bagel by New Cascadia Traditional. If I didn’t actually roll my eyes I’d be surprised, but thankfully I was alone.

I brought it home.

I took a tiny bite. Then I ate the whole thing.

Lo and behold, it was good! The texture was bagel-like. Not perfect. Not Gold’s. But certainly as close as any so-called bagel I’ve gotten in Portland in the last 2 decades. The outside is crunchy, the inside chewy. There’s a tiny bit of bitter taste to the dough, but with toppings, it’s barely noticeable.

Next weekend I’m going on a hunt for Nova lox (ooh, I bet I know who will have the answer to that.) And I’m going to serve my five-year-old bagels and lox. Perhaps it will become a new tradition.